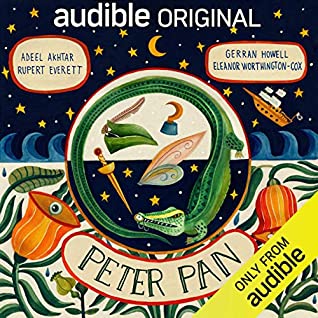 I have to admit, it’s been a fairly long while since I actually read Peter Pan. When this popped up for free on Audible, I snatched it up, I’m finding I really like full cast audiobooks, and I was excited for this version of the story.

Unfortunately, I didn’t really find it that great.

Some of the changes made felt a bit odd. I can understand updating the story a touch, but not if it doesn’t actually affect anything. In this production, the Darling children still live in London, but they live in World War 2 era London, with bombs dropping and their father off to war. To calm them, their mother tells stories, and their favourite is when she got lost in Kensington Gardens and met Peter Pan. In this flashback, she introduces herself as “Mary Darling” to the tree she befriends.

Which is odd, right? Like…as listeners, we’re not hearing her tell the story, we are hearing the actual events. But she has the same surname as the man she eventually marries? It’s a really small thing but it stood out to me.

And as for updating it, I don’t know why they did. The actual characters are the same, and Neverland is very much the same place people will be familiar with from previous versions. Tinkerbell is still a mean spirited fairy, nasty to Wendy. Wendy is a total drip throughout, and over and over again it’s emphasised how ‘girls are weird’ because both Tink and Wendy become overly possessive of Peter. This is clear when we get more of the Lost Girls.

This was an update I could appreciate – understandably, some aspects of the story do need to be updated, especially when it comes to Tiger Lily. And when her and the Lost Girls were mentioned, I got excited. But they’re barely in it, and only mentioned in counterpoint to Wendy, how she is motherly and perfect, and they are not.

Honestly, I know this is aimed at kids, but it still feels like it’s sending the wrong message. For every step they take to avoid problematic content, they rope in something else that undermines the attempts. The female characters exist for the male characters. The women are jealous and nasty to one another, with their main goal being to look after the boys. Even the Lost Girls, in their brief appearance, are shown to be not as effective as the Lost Boys.

A note on the voice acting. The actual acting was really good. There are very talented people involved in this production, across the board, and it’s a shame the writing just wasn’t up to par.

I would suggest picking up the Twisted Tales Straight on Till Morning instead, a story which keeps the core of these characters, but gives them more depth than can be found in this production.