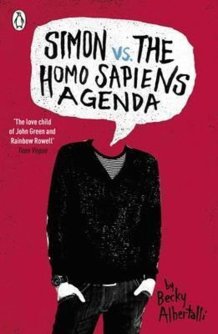 I am, quite possibly, one of the last people to have read this. It’s one of the books I picked up thanks to the hype on Twitter, and honestly, when book Twitter hypes a book, I’ve learnt it’s well worth listening to them. Simon VS is a great example of that.

Simon VS is a coming of age story, focusing on Simon as he attends high school, works on the school play, and tires to navigate the confusing world of teenage friendships (I remember that well enough).

Along with this, Simon is keeping a secret from those closest to him – he’s gay, and in a sort-of-not-quite relationship with a mysterious stranger called Blue. They chat via e-mails, and through them, we see their relationship develop and deepen.

And, honestly, this book is so damn beautiful. I love a book that can make me laugh and cry, sometimes on the same page, and this was…well, it had plenty of both. Simon is wonderfully, adorably awkward, not quite sure why the girls are annoyed at him, and making clumsy attempts to identify who Blue might be.

But on top of all that, he’s really doing his best. Not just trying, but doing. He misses his older sister, away at college (and not that I would tell him, but it does remind me of how much I missed my brother, many years ago) and the way that feeling is conveyed works well, not to mention the feeling of normality that returns when she comes home, the way they sink back into family traditions. (Side-note: the ‘traditions’ we had when we were all under one roof tended to be more along the lines of my brothers practising wrestling moves on me, and my mum screaming can’t we all bugger off again so there was peace and quiet)

There are so many lovely moments to this book, not to member a number of edge-of-your-seat ones.

(All spoiler warnings will be book-ended by puppies. By the way, this book is so lovely, part of it does feel like a puppy in book form)

The book opens with Martin attempting to blackmail Simon. Martin has seen his e-mails to Blue, and wants Simon to put ‘a good word’ in with Abby for him. Later in the novel, Simon’s friends act a little strange around him, and thanks to his younger sister, Simon discovers a very revealing post has been put on the school’s Tumbler page. I knew what was coming. I almost ripped the book in two, as we get closer and closer to finding out what’s happened. And, really, it’s heart-breaking. Simon’s hand is forced, and although he knows his parents won’t kick him out or anything, he’s still pushed into telling them before he’s ready.

Some people might think Martin’s actions – or Leah’s, or Abby’s, or some of the other characters in the book – are overreactions. And yeah, they kind of are (especially Martin. What an arsehole). But, the thing is, that’s what teenagers do (sometimes! Not all of them, not all the time, but sometimes!), they over-react. And, hell, plenty of adults do too, don’t get me wrong. But I remember, as a teenager, getting so worked up over stuff that doesn’t really matter, but which, at the time, really does.

It doesn’t mean those problems don’t matter. And that’s one of the things, I think, Becky Abertalli does amazingly well. She shows those things which, to adults, would seem small, but reflects them in a way that shows just how much it means to these teenagers.

None of the characters were unlikable because of the way they were written. Instead, Abertalli brilliantly guides you to conclusions about the characters, drawing you more into Simon’s head yet allowing us to make up our own minds about them. The teachers seem like they really do care for the students, Simon’s parents are supportive, and there are darker directions this book could have gone, but just didn’t. It all blends together really well, and feels so much like reading an actual high school student’s diary, it read almost like non-fiction. (In a really good way)

So, as you can tell, I absolutely loved this book, and will continue to make book-buying decisions based on Twitter. It’s enjoyable and wonderful and happy and uplifting and I almost cried when I put it down, after picking it up only two days before.