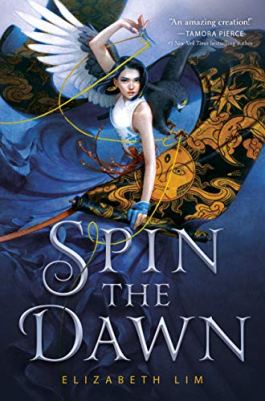 Firstly, look at that cover. It is absolutely stunning, and I spent ages just looking at both before and after reading Spin The Dawn.

This novel is the story of Maia, a young woman who wants to become the best tailor in the land. However, standing in the way is the fact she is a woman, and so is left to simply ‘help’ her father – despite doing most of the work – while her brothers go off to war. But when her father’s presence is requested at the palace, to compete in the search for an Imperial Tailor, Maia disguises herself as a man, takes her brother’s name, and goes in his place.

Reflection, the Mulan book for Disney’s Twisted Tales, was written by Elizabeth Lim, and as it is my favourite of the series, I had extraordinarily high hopes for Spin The Dawn. These hopes weren’t just met – they were exceeded, far beyond anything I expected.

Maia is a strong, young woman, willing to do anything for her family, but keen to achieve her own goals as well. She’s determined, ambitious, and resourceful, and though she starts a little naive when she arrives at the palace, she soon proves herself among the other tailors. As if Maia herself wasn’t enough to draw the reader in, from the moment she arrives at the palace, the mystery and intrigue surrounding the competition, the other tailors, the Emperor and his bride-to-be all work to keep the reader engaged throughout the first half of the novel.

And then there’s Edan. The court enchanter, Edan keeps a particular eye on Maia, and perhaps doesn’t fully believe her disguise. She is determined to avoid him, but keeps finding herself in his path.

Spin The Dawn is a romantic fantasy, combining various elements to create a rich, beautiful, and enthralling tale, one that proves absolutely impossible to put down. I, for one, cannot wait for the sequel.