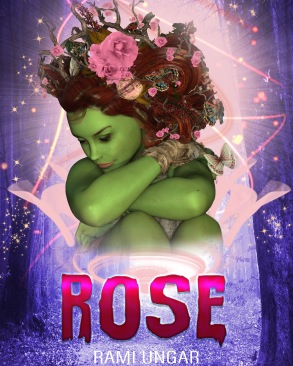 Welcome to my stop for the Rose book tour, the horror fantasy novel by Rami Ungar, and thanks so much for the invite from Blackthorn Book Tours. See my review below for this gripping novel.

Rose wakes in a strange greenhouse, with no idea how she got there, her memories missing, and her body transformed. As she struggles to discover what happened to her, she finds she now has buds sprouting from her, her skin is green, and she has somehow gained roots, requiring her to settle in soil every so often to feed off the nutrients.

Enter Paris, claiming to be her boyfriend, who explains Rose was involved in an accident the night before, and he found a way to bring her back. She’s in his greenhouse, and Paris tells her how completely in love they are, and how he’s going to protect her – she has nothing to worry about.

The reader is drawn into the situation, gripped by the events happening to Rose, and Ungar does an excellent job of ensuring the reader never quite knows what to think, leading them through twisted corridors and constantly second-guessing everything.

The majority of the novel is set in just Paris’ apartment and his greenhouse, but Ungar does great things with the space, making the reader feel as penned in as Rose, but never losing them with the containment. And when the novel moves, it really moves, dragging the reader along with the characters, increasing the pace and tension with every step.

It’s hard not to feel for Rose, trapped as she is and unable to interact with anyone, as her memories slowly start to come back. And it’s hard to get a handle on Paris, the impression being that perhaps in their previous life together, he wasn’t that great of a boyfriend.

The twists and turns in the novel feel natural rather than jarring, and the tension is kept high throughout, without feeling like its all just too much. Overall, I really enjoyed this book, and definitely recommend it to any horror/fantasy fans.

Rami Ungar knew he wanted to be a writer from the age of five, when he first became exposed to the world of Harry Potter and wanted to create imaginative worlds like Harry’s. As a tween, he fell in love with the works of Anne Rice and Stephen King and, as he was getting too old to sneak up on people and shout “Boo!’ (not that that ever stopped him), he decided to merge his two loves and become a horror writer.

Today, Rami lives and writes in Columbus, Ohio. He’s self-published three novels and one collection of short stories, and his stories have appeared in other publications here and there. Rose, his first novel with Castrum Press, will be released June 21st, 2019.

When he’s not writing your nightmares or coming up with those, he’s enjoying anything from the latest horror novel or movie to anime and manga to ballet, collecting anything that catches his fancy, and giving you the impression he may not be entirely human.