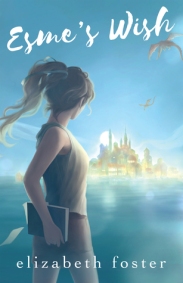 When fifteen-year-old Esme Silver objects at her father’s wedding, her protest is dismissed as the action of a stubborn, selfish teenager. Everyone else has accepted the loss of Esme’s mother, Ariane – so why can’t she?

But Esme is suspicious. She is sure that others are covering up the real reason for her mother’s disappearance – that ‘lost at sea’ is code for something more terrible, something she has a right to know.

After Esme is accidentally swept into the enchanted world of Aeolia, the truth begins to unfold. With her newfound friends, Daniel and Lillian, Esme retraces her mother’s steps in the glittering canal city of Esperance, untangling the threads of Ariane’s double life. But the more Esme discovers about Ariane, the more she questions whether she really knew her at all.

Esme’s mother disappeared when she was a child, and when her father remarries, Esme believes he’s making a mistake, convinced her mother is still out there, somewhere. Esme has always been a loner, neither her nor her mother quite accepted into the community. But when she discovers a new world, she finds more layers to her mother than she could have thought possible. Retracting her mother’s steps, Esme untangles the secrets of Aeolia, an enchanting world with magic and dragons, as well as making new friends, Daniel and Lillian, who help her find out both about Aeolia and her mother.

Esme’s Wish is the debut novel for Elizabeth Foster, and the first in a series for MG-to-YA series, and it was an absolute delight to read. From the opening chapters, to the strange world of Aeolia, Foster completely draws the reader in, connecting them instantly with Esme and painting a picture of such a beautiful if dangerous secondary world.

The threads of the novel wind together really well, and the characters remain believable and engaging throughout. From the strange, mysterious figures who seem to follow Esme, to the mayor and enchantress who might not be completely trustworthy, to the mystical beings inhabiting this world, everything about this novel keeps the reader riveted and keen to read on.

Esme is a really great character to follow, confident in her choices, yet uncertain about everything she discovers. The way the friendship was formed between the core three was handled really well, and felt realistic for characters their age, including the initial hostility between Daniel and Lillian, and the way they put this aside for Esme. The writing is magical and engaging, the descriptions stunning without being too much, and the worldbuilding handled really well.

Overall, this was a fantastic novel, one I definitely think younger, MG readers would enjoy, and which leaves plenty of room for the sequel. I’ll really be looking forward to book two in the series.

Elizabeth Foster grew up in Brisbane, Australia, and now lives in sunny Sydney. Apart from writing and reading, she loves swimming in the ocean, walking, and playing the piano (badly). She has just finished the sequel to Esme’s Wish and is now hard at work on the final story in the Esme series. You can usually find Elizabeth on Twitter @e_foster3

‘Absorbing, enchanting, whimsical, Esme’s Wish is a story to lose yourself in. I would recommend this book to readers one and all.’ – Isobel Blackthorn, author.

Get the book via Amazon