Welcome to my stop on the Write Reads blog tour for dark YA Fantasy The Devil’s Apprentice. This book is the first volume in The Great Devil War series, drawing the reader into this vivid reimagining of hell.

Philip is a very good boy; he always does his homework ahead of time, is polite to adults, and can’t tell a lie at all. Yet he finds himself in Hell, where he discovers Lucifer is dying, and requires an heir. Philip might be the wrong boy for the job, but with no other choice, Lucifer trains him, working to shape Philip into a devil ready to take over the throne.

The Devil’s Apprentice is an imaginative take on Hell and The Devil, introducing sympathetic demonic beings and a young boy caught in a dark plot against Lucifer. But more than that, the novel shows how easy it is to fall to temptation, the ways in which our emotions can blind us, how even the smallest acts of kindness can have far-reaching effects, and elements of cruelty can cause consequences. Philip’s arc is interesting and engaging, drawing the reader effectively along. He starts off as almost insufferably sweet, a boy who for all his goodness has no friends. But in Hell, he learns about who he is and what he could be, and how sometimes, it’s not completely evil to tell a lie.

The characters are multi-layered and engaging, and Philip is surrounded by an interesting cast, including Lucifax, the Devil’s cat, love interest Satina, enemy Aziel and a Hagrid-like gatekeeper at the entrance to Hell.

There were some really dark moments in the novel, and a couple of times it felt like it was leaning too much into the morality aspects. The exploration of temptation is good, but there was a particular scene I personally felt was a little unnecessary, in terms of the people being punished and what their ‘sin’ was. And some elements of Philip’s character arc, especially towards the end, felt just a little bit rushed.

Overall, however, I did enjoy reading this novel, and would without a doubt continue with the series. It feels fresh and unique, and though it perhaps might not be suitable for the younger end of YA, slightly older teens would probably enjoy reading about the dark, dangerous landscape of Hell and Philip’s journey. 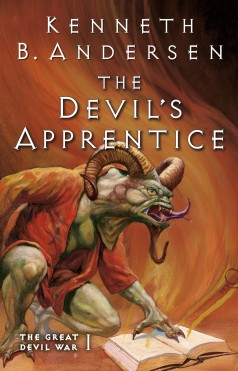 Philip is a good boy, a really good boy, who accidentally gets sent to Hell to become the Devil’s heir. The Devil, Lucifer, is dying and desperately in need of a successor, but there’s been a mistake and Philip is the wrong boy. Philip is terrible at being bad, but Lucifer has no other choice than to begin the difficult task of training him in the ways of evil. Philip gets both friends and enemies in this odd, gloomy underworld—but who can he trust, when he discovers an evil-minded plot against the dark throne?

The Devil’s Apprentice is volume 1 in The Great Devil War-series.

Kenneth B. Andersen (1976) is an award-winning Danish writer. He has published more than forty books for children and young adults, including both fantasy, horror, and science fiction.

His books have been translated into more than 15 languages and his hit-series about the superhero Antboy has been turned into three movies. A musical adaptation of The Devil’s Apprentice, the first book in The Great Devil War series, opened in the fall 2018 and film rights for the series have been optioned.

Kenneth lives in Copenhagen with his wife, two boys, a dog named Milo, and spiders in the basement.

Don’t forget to check out the other stops on the tour, too! 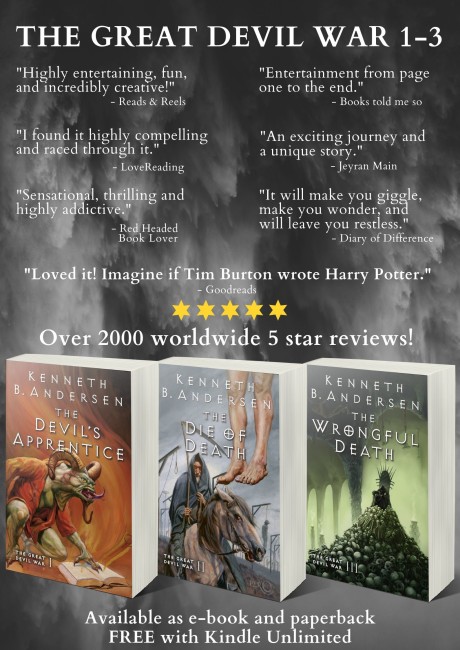