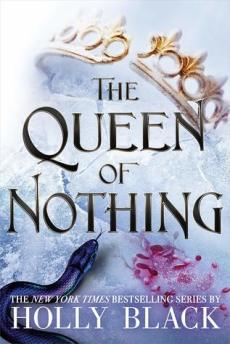 Please note, dear friends, this review will contain spoilers for the first two books in the series, The Cruel Prince and The Wicked King.

In this trilogy, collectively called The Folk of the Air, Holly Black has created a rich, beautiful, dangerous and alluring world, one I could not wait to get back to in The Queen of Nothing.

Introduced to Jude in The Cruel Prince, when we first meet her she is powerless, at the whim of the fae, and trying to forge some sort of protection for herself in a world she calls her home, but where others insist she doesn’t belong. In The Wicked King, we see the development of her relationship with Carden, as she gains control over him and, in essence, rules the land from the shadows.

The Wicked King drew them closer together, resulting in marriage between the pair, before Carden has Jude exiled to the mortal world, until she is pardoned by the crown.

The Queen of Nothing starts there, with Jude scraping by in the mortal world, living with her sister and brother, and doing odd jobs for the fae folk on this side. But her unhappiness is clear, and though she pretends it’s homesickness, her worries revolve around Carden, the throne, and those who would betray him. When Taryn arrives, offering a chance to briefly go back, Jude is all too eager to take it.

Although Jude is essentially the queen, she returns to a world where she is basically powerless, unable to do much except observe and wait. And the world as she knows it has changed, as forces move against Carden and the threat of war builds.

As with the previous books, the book feels much like the fae; beautiful and dangerous, drawing us deeper into this world and giving fans, I think, exactly what they would have wanted from the final book.

To a point, anyway.

It’s hard to go into what I love about this book without spoilers, but I will say there were moments I held it close, glued to the page, entranced by the events unfolding with my heart in my throat. Moments I gasped from joy, moments I gasped from fear. The Jude-Carden scenes are as enthralling as ever, the relationship between the sisters brought tears to my eyes, and the choices Jude faces up the stakes in a way the last in a trilogy should.

The only ‘problem’ I have with this book is that it is the last, and I so desperately miss it already. I miss the anticipation of wondering what’s going to happen next, I miss the interactions between the various characters, the sense that Jude is always skirting on the edge of something dangerous. The Queen of Nothing provides a fantastic, satisfying conclusion to an absolutely brilliant series. The Cruel Prince was the first book of Holly Black’s I read, and I will now be seeking out more, hoping to forever fill the void this trilogy – like others before it – has left in me.

On that note, if you have any recommendations for similar books, I would absolutely love to hear them.