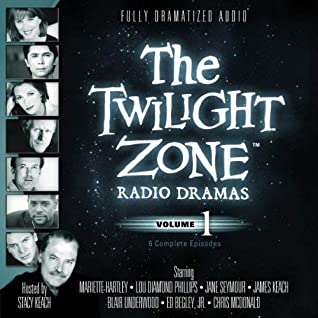 Can you tell I am absolutely loving Audible?

I try to mix up what I get, and so far I’ve tried non-fiction, full cast, fiction single person narration, and now The Twilight Zone Radio Dramas. Having grown up in the UK, The Twilight Zone wasn’t something I had access to. Not long after we first got together, I got the first ever series on DVD for me and my boyfriend, and we’ve been very slowly making our way through them.

As such, I have never actually heard the radio series before, and was excited to dive in. All except one of these stories were completely new to me, with Long Live Walter Jameson being the one I knew, as it is in the first series of the television show.

The stories contained in this volume are Night Call, Long Live Walter Jameson, The Lateness of the Hour, The 30-Fathom Grave, The Man in the Bottle, and Night of the Meek. Just like in the TV show, the characters range from the likeable and sympathetic, to the kind you’re not sure about and are off-put by. Others fall in the middle, keeping the listener on their toes regarding the characters until, perhaps, the final revelation.

Night Call is a creepy yet ultimately sweet story, focusing on an elderly woman who receives strange calls, though the people around her try to dismiss them as accidents, she knows they are something more.  Long Live Walter Jameson is about a history teacher who talks about the past as if he actually lived it. Even though I’d seen this play out in the TV series and therefore knew the twist, it was really interesting to revisit this in audio, when the clues have to be presented more carefully without the reliance on sight.

The Lateness of the Hour doesn’t have the most hard to spot twist – none of these really do – but the story is entertaining and engaging, and it’s hard not to feel for the characters presented here. It’s a story about a young woman growing up and growing curious, and the father who wishes to keep her at his side. Similarly, The 30-Fathom Grave has an ending in some ways easy to see, but it’s the little extra bits that make it worthwhile. It’s about a naval destroyer picking up signals from a ship that sunk twenty years before, and this one is honestly creepy.

The Man in the Bottle shows just how tricky genies can be, focusing on a kindly yet impoverished pawnbroker who is sometimes perhaps a bit too generous. When he gets four wishes, he tries to ensure they are carried out exactly as he wants, but even that isn’t enough. There was a lot going on in this one, and I found myself quickly wrapped up in the story, trying to work out what the next wish would be and how exactly it would go wrong.

Finally, Night of the Meek rounds off the volume with a story about Christmas, Santa and Christmas miracles. This was a sweet, heartwarming story about a department store Santa who just doesn’t have it in him to spread Christmas cheer, until he discovers a sack of presents which seems to contain exactly what people want most for Christmas. This was a good story to end the volume, really nicely showing how the smallest of gifts can go a long way, and how important hope is.

I really enjoyed listening to these radio dramas, and it was a great way to get a different type of storytelling from The Twilight Zone, with all the elements of an audio production done really well. Without a doubt I’ll be listening to Volume Two at some point in the future.