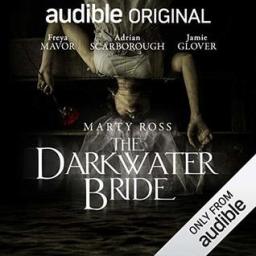 Katrina believes her father to be a good man, honest and hard-working. He promises her he has to make one last business trip to London, and then he’ll never have to leave home again. But when his body is pulled from the Darkwater, Katrina travels to London to find out what exactly happened to her father.

This is another full cast audio production, and it works really well. The characters are fully fleshed out, emphasised by the voice actors, from the innocent Scottish Katrina to the maybe a little naive policeman Cully, to the gruff old detective and the various others who inhabit this world.

Katrina and Cully retrace her father’s footsteps, revealing to Katrina that she, ultimately, didn’t know her father at all. Overshadowing all this is the The Darkwater Bride, a mysterious figure mentioned in passing, who Katrina becomes convinced is tied directly to her father’s death.

Along with the characters, the story weaves in and out of various locations in London, with Cully forever insisting Katrina remain behind, and her determined to move ahead and confront exactly who her father was. I have to admit, this back and forth got a little tedious at times, a touch repetitive, but the voice actors dealt with it well and the interactions between the pair were still entertaining, even if we’d heard something similar shortly before.

It really was the voice acting that made this a 4 rather than 3 star. The story is good, but does get a little repetitive – characters go to dodgy places, discover Katrina’s father went to these places, find out he did something bad there. At times, Katrina comes off as too naive, and at others, so does Cully, whereas in other scenes we see the opposite.

The Darkwater Bride is definitely enjoyable, with the mystery of the bride building up, and there’s a lot in here about the way women are treated, what women must do to survive and the sort of thing they have to put up with to just keep going. The ending felt a bit forced, but overall this was a good production with a good cast, and an interesting story.