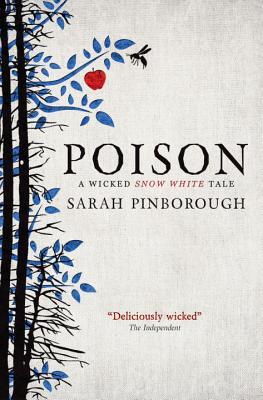 Poison is a slightly darker, twisted version of the Snow White story, adding in a little adult content and ensuring things aren’t as clear-cut as the story we’re used to. I won’t do my usual synopsis style introduction here, because I’d be surprised if anyone doesn’t know the story of Snow White, but I will say some of the additions Pinborough has made here are really interesting.

Firsty, and this is similar to other Snow White retellings, we get more depth to the queen. Here, however, the whole story has more worldbuilding involved, creating a fantasy world rather than just having a generic fairy tale setting. This is a world where kingdoms are at war with one another, and we see the impact on the people left behind. We understand the queen’s marriage, we see the reasons she dislikes Snow, we, in general, feel more sympathy for her.

The worldbuilding plays a bigger part here than you’d expect, too. The various wars impact the kingdom, including the dwarves, and play into the prince’s character, too. We see more of the dwarves, get to understand some of the politics of this world, and far from being a damsel in distress, Snow shows herself to be more down to earth, carefree and kind, as well as strong-willed.

And rather than Snow simply stumbling upon the dwarves when she is forced away from her home, she grows up with them. They are her friends, and she turns to them in her time of need, trusting them to protect and keep her safe.

The differences between the fairy tale and this version are what make this really interesting. It reads as a more fully-fleshed fantasy story, rather than a fairy tale retelling. Although key elements remain the same, there are additions and links to other fairy tales, reminding me a little of Once Upon a Time, one of my favourite TV shows (until the last season. Let’s not talk about that).

There are references here to Hansel & Gretel, to Aladdin, and even Cinderella, through a pair of enchanted slippers. This isn’t just Snow White’s world; this is a deeply, well thought out place where all the fairy tale characters live, and interact.

The Huntsman stumbles into the situation, not really knowing what he’s getting himself involved in when he meets the queen. The Prince falls in love with an idealised version of the sleeping princess, and his whole character was a fantastic twist on fairy tale princes in general, and the habit of putting people – especially women – on pedestals, demanding they be something they’re not.

And the ending – the last third of the book – is where the contrasts really come out, where things twist and turn to give us something different from the original fairytale. There isn’t really a happy ending here, but it’s one that leaves the reader wanting more, and considering there are two more books in this series, that’s definitely not a bad thing.