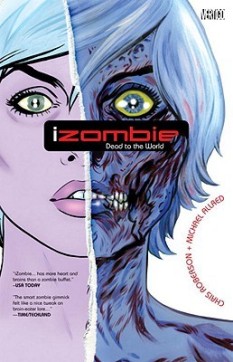 In the graphic novel, Gwen is a zombie. She needs to eat brains once per month to stop herself going full, mindless zombie. Luckily, she works as a gravedigger, giving her access to freshly buried bodies. But when she eats those brains, she gets flashes of the dead person’s life, often driving her to solve whatever unfinished business they had.

Assisting her, she has her best friend Ellie, a ghost, and the guy with a crush on her, a wereterrior called Scott/Spot. In this story, she discovers her latest dining experience died at a mysterious house, and she sets out to find out what happened.

I really liked this graphic novel. The art style matches wonderfully with the story, really capturing the ‘essence’, as such, of the characters, making Gwen look almost dead – but not so dead it’s obvious to others – and giving Ellie an almost ethereal feel, really giving the impression of a ghost.

The story, too, is intriguing, as we – and Gwen – try to piece together the dead man’s life and death, and how exactly the mysterious stranger is involved. It lays out the situation well, and does a fantastic job of presenting the relationships Gwen has with others.

And the friendships were something I really enjoyed. Gwen can’t really hang out with ‘living’ people, and she spends most of her time alone, but Ellie and Scott ensure she still has people she can turn to and trust, while both are still shown to have lives away from the main character.

By the end of volume one, we’re left with some elements tied up, and others remaining open, including a love interest for Gwen and the mystery surrounding the man who could be a possibly ally to her. It’s overall a really intriguing story, with great artwork, and I really hope I can read volume two sometime soon.