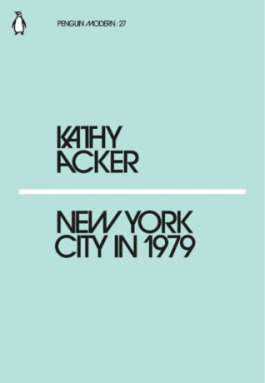 I wanted to read this book as part of my research for a future WIP. I thought this might help me get an idea of New York, specifically perhaps the alternative culture in New York during the end of the 70s.

Instead, New York in 1979 is a short, snapshot-type look at a few different ‘characters’.  I’ve never come across Kathy Acker’s work before, so I didn’t really know what to expect.

Goodreads’ description notes, “A tale of art, sex, blood, junkies and whores in New York’s underground, from cult literary icon Kathy Acker.” I wanted something to really dig my teeth into, to really get a sense of people and place, but instead it’s a collection of dialogue, thoughts, and images.

It’s not bad as such, it’s just…not great. I can see how this could have gained prominence and a cult following back in the 80s, and I can see how important something like this might be, but I don’t think it necessarily deserves to be called a ‘modern classic’.

Like I said, these are snapshots, presented in ways such as overheard conversations in a jail, or quick, short, almost stream-of-consciousness scenes about an escort arranging her schedule. They’re interesting, but I read through this pretty quickly and I don’t think it would have that much of a lasting impression in the long-term, for me personally.

I might give this another go at some point in the future. It’s short enough that it barely takes any time at all to read, so it’s no loss to try again. But in this instance it just didn’t click for me, but maybe it will with someone either more familiar with the writer, or who enjoys more experimental type writing.