There’s a few things which crop up every now and then, whether they get shared on your favourite social media site or come up as just click-bait, sometimes you can’t help but see the same thing again and again. The whole double standards thing is one of them. It’s usually an article showing how ‘wrong’ society is in the way we see certain things, and to be honest, most of these are complete and utter bollocks. 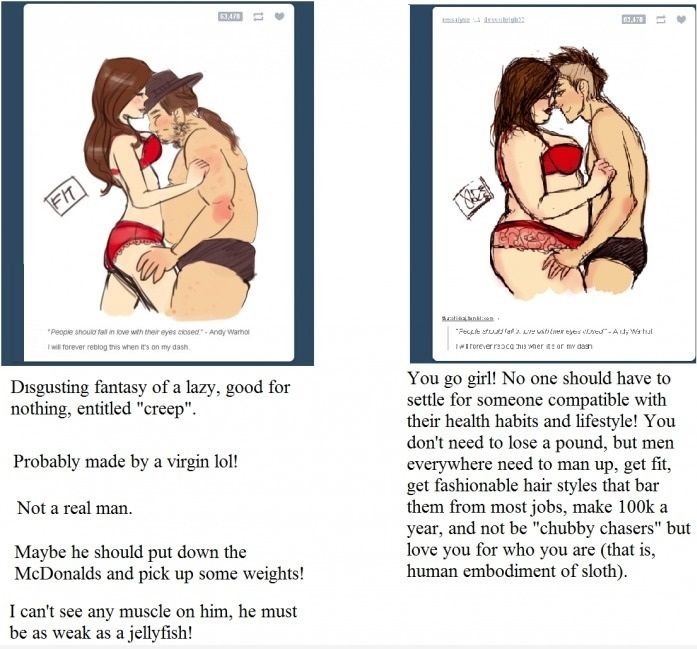 This is the image in particular that at the moment, has got me…let’s just say a little riled. Two images. One of a skinny girl with a larger guy, and the other of a larger girl with a skinny guy. The comments beneath are obvious. I can’t help but assume whoever wrote these is a guy. Maybe a guy who needs to sit down and have actual conversations with women. Because, hell, maybe there are some girls like the ones above, but most women I know are completely and utterly not like that.

Here’s a secret for you guys; yes, looks are important. Love flourishes with attraction. Of course it does. But realistically, personality will always win out. Always. IT IS NOT JUST ABOUT LOOKS. I can’t say if guys feel the same way. I don’t know. But the fact is I have known more girls go for guys who others would deem to be ‘below them’ than the other way around. Not that it matters either way. Let’s face it, the kind of guy who thinks the above statements are real, are probably not nice guys to begin with.

Personally, I’ve been attracted to all sorts of guys. I’m not exactly skinny myself, and I know I’m not going to get swept off my feet by some tall blond guy with a rock-hard six-pack. And I’m okay with that. Because the type of guys I go for have more than just good looks. They’re funny, charming, witty….and hopefully, on my end, they see me as more than just a pretty face. There is nothing wrong with either of the above pictures, and whoever added those comments beneath them seems to be missing the point of the drawings themselves (if anyone knows who created them, please let me know so I can credit and link to them). Look at the text at the bottom. Look what it says.

“People should fall in love with their eyes closed.”

Girls could be attracted to the best looking guy in the world, and be turned off when they find out he’s an arse-hole. Similarly, they could meet someone who isn’t conventionally good looking, but as they get to know him, personality shines through and changes the way they see him. It’s happened to me. It’s happened to others I’ve known. And yeah, opposites attract. I said there’s nothing wrong with those pictures, and there’d be nothing wrong if it showed a skinny guy & girl or a larger guy & girl. Or two big guys, two skinny women, or any other mix that could be thrown in.

If any guys are reading this and honestly do believe those comments, do me a favour. STOP. Take a few seconds to really think it over. Don’t be nice because you think you might get sex out of it. Don’t be a dick because you think that’s what girls are attracted to, and don’t sit at home lamenting the fact that no one has looked twice at you. In truth, girls are really bloody subtle at checking guys out so in reality, you don’t know if some hot girl might have been staring at you while you were in the queue at Tesco. There might be a really good reason you were turned down by  that girl you liked or, hell, maybe she really isn’t attracted to you and THAT IS OKAY. Sometimes attraction doesn’t happen, but please just don’t turn around and claim all women are horrible or even that that one girl is a bitch, because they didn’t reply to your message on POF or refused that drink. There are plenty of fish in the sea and believe me, if you go through life pretending to be nice (referring to the point above about trying to get laid) we will see through it. If you actually are a nice person, who is fun to talk to and fun to hang out with and act like a friend, you never know what they friendship might grow into.

Just don’t let stuff like the above get into your head. It’s bollocks. Be yourself is the best advice for any guy (and woman) looking for that special someone. Yeah, try and be healthy. Try to look after your body because you don’t want to be half way through round #1 and find you have no energy to go on. But understand that people aren’t idiots. Guys and girls know that not everyone is going to be small. Not everyone is going to have a ‘perfect’ body and, once again, that is okay. It’s okay to have a bit of a stomach. It’s okay to not have a six pack or have slightly broad shoulders or whatever. Very skinny isn’t sexy. Neither is massively big. Healthy….healthy is. And I am saying this as someone who has taken themselves off the dating scene for the time being because I am not at a level of health I like. That’s my choice. I am never going to be super skinny. Never going to have a perfect body. But once I feel fitter and happier in myself then sure, I’ll probably put myself out there a bit more. But for now….

Just take my advice. No one knows what you want except you, and no one knows what that hot guy/girl in the corner of the pub wants except them. So rather than moaning that there’s no way they’re going to be interested because they obviously like a different type of person, strike up a conversation. Talk to them. Treat them like, well, a person. Because that’s all they are. Another person. Not some god/goddess. Not some alien from another planet. Another person. Just like you. Just like me. So treat them like it.