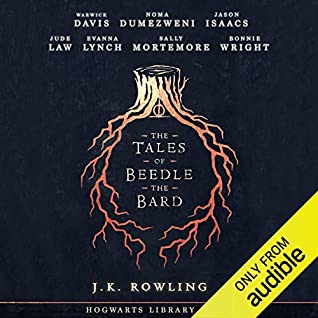 I originally read this book many years ago, shortly after its release, when a friend leant it to me in university. I remember finishing it in one sitting, and sort of enjoying it, but not enough that I ever really sought it out to read again. When this popped up as a free read on Audible, I thought I’d dip my toe into the Wizarding World again.

I’m going to preface this now with saying – I love the Wizarding World. I love Harry Potter, and Hogwarts will always have a special place in my heart. I do not, however, support JKR. Her attitude on Twitter has made it clear the kind of person she really is, and that person is not someone I admire.

Let me start with the voice acting for this audiobook. It is fantastic. The actors are the same actors involved in the film franchise, and they are absolutely fantastic. Jude Law provides narration as Dumbledore. Warwick Davis, Evanna Lynch, Jason Isaacs and Bonnie Wright are just some of the names familiar to HP fans involved in this project. Each narrator really brings the stories to life, giving them an extra something that maybe wouldn’t be present if I was reading this book rather than listening to an audiobook.

The stories themselves are okay. They’re basically fairy tales, but as if they were told by witches and wizards, rather than just about those characters. Much is made of the fact Beedle wrote nice things about Muggles, and the characters often help each other rather than witches and wizards keeping themselves separate. It’s about helping the community, being tolerant of one another and, er, hey, maybe certain authors should go back and read their own books. Just saying.

So the stories are sort of okay. But this audiobook isn’t just the actual tales being told in here, it also contains the ‘notes’ from Professor Albus Dumbledore, read by Jude Law.

The main thing I disliked about this was in those notes. They just come across really, really smug, and not because Jude Law is reading them, or because it’s ‘Dumbledore’. They constantly feel like JKR patting herself on the back for such ‘forward thinking’, constantly admiring herself for how different these are to ‘Muggle’ fairy tales, when there’s nothing here to really make them stand out, except that they are part of the Wizarding World.

The actors involved really made this worth listening to, but unfortunately the actual content falls flat. I’m honestly glad this was available for free – would not have wanted to spend money or even my Audible credit on it.