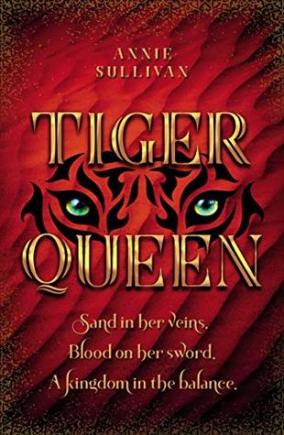 To rule Achra, Kateri – the king’s daughter and only child – must defeat her suitors to prove her right to rule. Gaining the crown means she can fulfil her promise to her dead mother to protect her people. Achra suffers with a long drought and frequent windstorms, made worse by the Desert Boys who come into the city to steal water from the people. When she finds out who her last suitor is, Kateri faces a choice – remain and be defeated, losing her chance to rule, or escape into the desert, seeking help from the last person she ever thought she’d speak to.

Tiger Queen is a YA Fantasy, set in the desert and in a corrupt, broken city where the rich have all the luxuries they need and the poor are forced to abandon their third children after the king brings in a two children rule.

I really enjoyed this book.

Yes, it’s got familiar tropes, yes it’s a touch predictable, but honestly? Sometimes that is exactly what you need. And those elements (I think) can work well in YA, when the target audience might not have come across the same things as many times as, say, an adult reader like myself.

I liked Kateri as a character. She starts off sheltered and naive, with her world painted in black and white. She fully believes the king is doing what is best for the people, and the Desert Boys are evil. Kateri doesn’t question it, not until she escapes into the desert and actually meets the Desert Boys, realising they are, in fact, simply children trying to get by.

The Desert Boys were fun to read about, a mixture of Lost Boy’s and Robin Hood’s Merry Men, all eager to prove themselves. And I really liked the scenes between Kateri and their leader, Cion – there were really good moments here, ones which just made me smile.

Kateri is determined, and keen to do right by her people. She’s not a character given to moping, and she is willing to step aside if she thinks it’s the right thing to do.

There were, however, some things which I didn’t like as much.

I feel there could have been deeper relationships between Kateri and some of the other women presented in the story. For the most part, the women here are just shown as caretakers, from Cion’s aunt, to an elderly lady looking after abandoned babies. Kateri’s maid, at the start of the story, could have been a good source for this, but it feels like a missed opportunity. I also think there could have been ‘Desert Boys’ who were maybe Desert Girls instead – this is a fantasy world, and given the situation, its doubtful every girl in the city would be content with things, especially when male children are favoured and there is a strict two children rule.

Other than that, this was a really enjoyable, action packed read, well written and tightly paced. If you enjoy YA Fantasy with a focus on romance, I suggest checking out Tiger Queen.